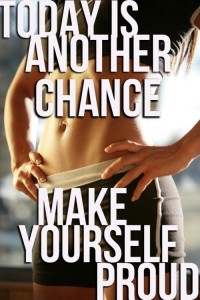 It’s a trick question of course, isn’t it?

You see the truth is that when you finally get ‘there’ with your body, you realise your entire life has already begun to change. And that it’s just the beginning.

I see it all of the time with the women I work with.

As the final external layer sheds, all of a sudden layer upon layer of inner stuff starts to be revealed. Starts pouring out. Emotions are purged. And the whisper – even the faintest whisper – of a chance at living that one-day dream life suddenly makes itself heard.

But here’s where most women get it oh-so-very-wrong.

I’ll go so far as to say even most coaches get it wrong. And I’ll go a little further and admit that I too have been one such coach in the past, on a personal level as well as a professional one.

What most women do, when they want to change their body, is that they push.

Without meaning to, they find themselves clawing and fighting desperately to get the body they want.

Believing that ‘it has to be done this way’, that if they don’t eat PERFECTLY or hit that magic number on the treadmill timer then they can’t succeed.

Separating dream life creation from dream body creation. Saying to themselves that they’re not allowed to do this, wear that, act like she does, be ‘that girl’ until they have exactly that body. All of the time. 100% of the time.

That you aren’t allowed to buy new clothes yet …

That you don’t deserve nice things …

That they wouldn’t give that role to someone like you …

That he or she wouldn’t be interested in you …

Have you ever told yourself you’re not good enough to live that kind of life, that a life like that is the stuff of fantasies or simply not for you? 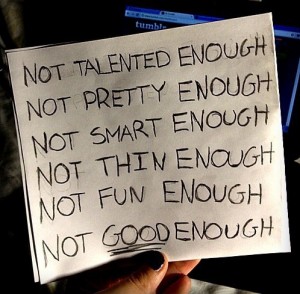 If you’ve ever done or said any of this stuff, even just in your own head, I gotta tell you –

And I’ve been there too.

I’ve worn the same worn out gym clothes for years, always with a vague idea in the back of my mind that once I get ‘there’ I will buy gorgeous, fitted, bright, shiny stuff. And I don’t just mean I’ve worn old stuff but I’ve actually worn torn and stained stuff.

But they weren’t amazing either.

And they certainly weren’t something I’d expect someone gorgeous, stunning, vibrant, successful to wear.

But sure, they were okay because it was ‘only for me’.

I’ve resisted chasing a few major personal bucket list items because I wasn’t ready. Like doing a sexy bikini/fitness model style photo shoot. I put that off for 10 years, up until recently*

I’ve put off following through on writing a ‘real’ book and finalising the publishing of it, even though. I’ve told myself for years I need to be, I don’t know, just – better. More successful. More polished, put together. Who am I to think I can write a book?

There’s more as well, but I think you get the idea.

I don’t know about you (well, I’ve got a good idea to be honest as I think you and I think a lot alike) but for me there’s been a common thread between failing to chase some of my biggest life dreams and not yet having the body I want.

You see, in many ways, I’ve kind of had my life on hold until I get there.

And I know that you know where I mean when I say *there*.

There is that magical place. The mirage you so often see peeking at you from over the horizon. It’s the place where you love your body, where you feel powerful and in control and on. Where you are long and lean and lithe, where you naturally choose food to nourish your body and your mind, where you effortlessly laugh off the idea of even a few rows of chocolate let alone an entire binge. 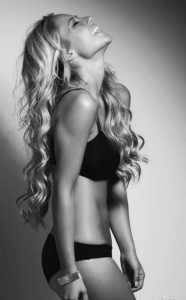 It’s the place where you are that girl.

Where everybody notices how stunning you are.

Where you can wear whatever you want.

Do whatever you choose.

Do you know that place?

Have you been there yet?

Or is it still a dream? One that for some reason forces you to put all your other dreams on hold until you make it your reality?

Truth Time: You Will Never Get The Body You Want This Way

I can look back over the past 10 years and remember times when I was a good few kgs heavier than I am now, but also when I was as much as 8 kgs lighter than I am now. Yes, even post photo-shoot, when I’m in the best shape I’ve been all year.

But you know what?

At 27, when I was about as tiny as I think my body is capable of ever going, when I had barely a pinch of fat to be found anywhere, I was still not content.

A face that could have been more relaxed if I was willing to just cut myself some slack.

And a mind that was nowhere near yet ready to realise that the ultimate self-love happens simply when you choose it, not when you’ve earned it.

Because the truth, beautiful lady, is that you’ve earned it simply by being you.

But the truth that perhaps would be easier not to hear is that you will never ever ever achieve the body goal you so crave if you continue to make it a destination not a journey.

And the even bigger truth – the one that will scare many people into not wanting to fully read or at least not then think about what I have to say today – is that you can live an incredible, amazing, fantastical life regardless of what you look like or what you think other people see you as.

If you’re waiting to earn your stripes and start creating your dream life by being physically good enough you’re going to be waiting a helluva long time.

But here’s the real secret.

The women who do achieve that incredible transformation, who finally get *there*, they are the ones who get out there and start making the rest of their life happen. In really big and really exciting and really scary-but-yet-awesome way.

They quit their jobs.

Start their own business.

Quit their business, even, and start new ones.

They go on crazy adventures. Pack up their stuff and do that one day travel.

Change their friendships, their relationships, the people who they hang around and who influence them.

They even do sexy photoshoots before they feel ready 😉

They are actually not yet *there* or at least not where they once thought *there* would be.

Because if by *there* you mean perfect, then no – they’re not there.

Instead they are here.

And here is where it’s really at.

Suddenly seeing yourself – if only a glimpse – the way others see you.

Standing up a little straighter just because you’re you.

Being that girl. Simply by choice. Simply because when you start believing and seeing it as real – it is real. 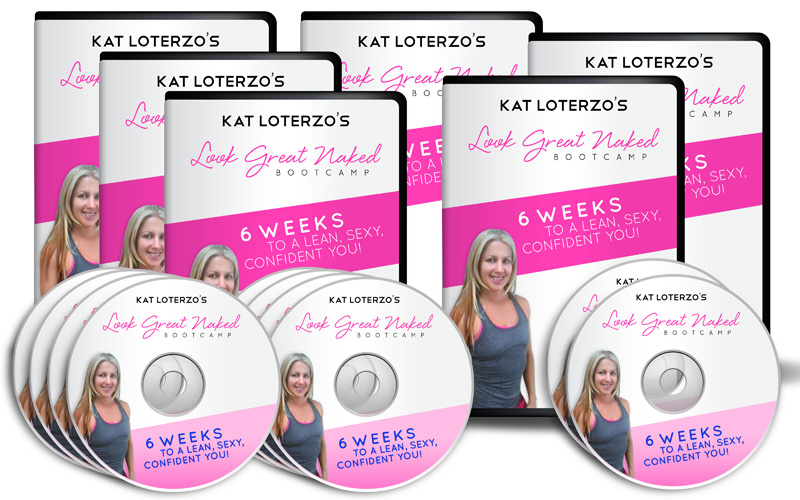 This program is the creation I am most proud of out of all the very many things I have done in the past few years. And it comes back to this –

My past Bootcamp Beauties (many of whom loved it so much that they are coming back, and more than 9/10 of whom said they would ‘absolutely recommend it to anyone!’) have absolutely owned the reality that changing your body is about so much more than just eating and training right. As far as surface results go, the physical changes are absolutely there – and in a matter of less than 6 weeks. This is, after all, a highly structured intensive online program for massive physical change. The Look Great Naked Bootcamp promises to take you from stuck and plateaued to walking around feeling sexy, confident and HOT in just 6 weeks. And it does that – 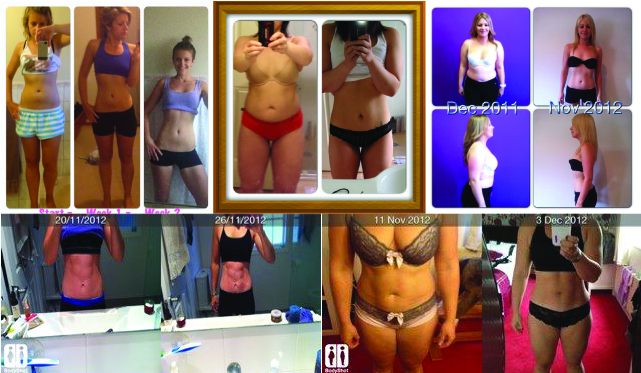 But it does so much more than that.

Daily on our private forum I see women talking about how they feel that this bootcamp has changed not only their body but also their life. 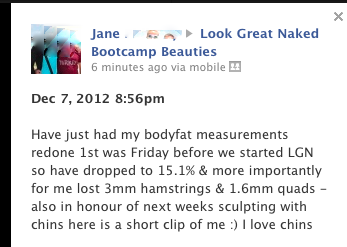 Here’s what it all comes back to for you, and I say this regardless of whether you’re thinking of joining my bootcamp or not –

The only way – the only way, to change your body and live your best life, now is to recognise that it ALL can begin now.

You don’t have to be a certain dress size or body fat percentage to be able to love who you are, to be able to stand up tall, wear gorgeous things.

You don’t have to reach perfection to feel proud, confident, sexy. To chase after your dream life. To make. things. happen.

And in fact if you are waiting to get to that magical place?

You’re never quite going to make it. It will always be out of reach.

So here is my challenge to you.

You can change your body in an instant. Can you see that? You can decide right now that you ARE that girl. That rather than waiting until you’ve made it you will start living it. You will start making small but powerful changes now to eat, train, live and most of all to think with the mindset of the woman you want to be. The woman you already are, if only you’d let her out.

This bootcamp is not for everyone.

It will push your buttons.

The meal plans and training are structured, and detailed.

The emotional and inner work that I’ll be asking you to do will bring up a helluva lot of stuff. And you might not want to face it.

It’s about you, deciding right now, that you want to step up and make 2013 the year in which you stop the fight. In which you stop pushing, and clawing and desperately trying to control your ability to change your body.

In which, instead, you do change your body.

And in doing so you change your life.